Mary Queen of Scots Buried At Westminster Abbey In London

Westminster Abbey is the place of burial or commemoration for more than 3,000 people, including royalty, statesmen, poets, churchmen, scientists and musicians. It attracts lovers of history, architecture, fashion and sculpture and is still a working church. Arrange your visit to this treasure house of British culture and history today as part of our London Highlights Tour.

Mary Queen of Scots Buried At Westminster Abbey In London

While it’s true that Mary Queen of Scots and Elizabeth I never met in real life as they appear to in Josie Rourke’s film Mary Queen of Scots, today you can visit their burial sites under the same roof in London’s glorious Gothic church Westminster Abbey.  Often confused with Elizabeth’s half-sister, who was known as Bloody Mary and reigned as Mary I, Mary Queen of Scots was the granddaughter of Henry VIII’s sister Margaret Tudor, making her a first cousin once removed to Henry’s daughters.

Mary Queen of Scots was born in 1542 in Scotland and sent to France at the age of six as a bride for the Dauphin Francois, as part of an alliance between Scotland and France against the English. She was brought up at the French court and married Francois in April of 1558 when she was fifteen. She was Queen of France for 18 months until July of 1560 when Francois died and she returned to Scotland. For the rest of her life, Mary was prey to ambitious men who sought to marry her as a path to the throne for themselves.

She married the dissolute Henry, Lord Darnley in July 1565 and their son the future James VI of Scotland was born in June 1566. Mary had a claim to the throne of England through her grandmother, Margaret Tudor and tried to persuade the childless Elizabeth to name her as her successor. Her Catholicism was an insurmountable barrier to succeeding to the English throne and she was regarded with suspicion by Elizabeth and the English Protestants at court.

Throughout the 1570s and 1580s at least three plots to depose Elizabeth and place Mary on the throne in her stead were uncovered by Elizabeth’s spymasters and eventually Mary was tried for treason and condemned to execution. Elizabeth was reluctant to set the precedent of executing an anointed queen but Mary’s death warrant was signed on 1 February 1587 and Mary was executed a week later on 8 February at Fotheringhay Castle on Northamptonshire. Her original burial took place at Peterborough Abbey as the nearest appropriate location to her place of death.

Elizabeth reigned on until her own death in 1603 when Mary’s son James VI of Scotland inherited the English throne and reigned as James I of England and VI of Scotland, the first monarch of the House of Stuart.

In 1606 James commissioned a marble tomb created for his mother in the Lady Chapel of Westminster Abbey. By 1612, it was finished and Mary’s body was exhumed from her original burial place in Peterborough Abbey and moved to Westminster Abbey in October. Today, a flag of Scotland hangs in Peterborough Cathedral to mark the former location of Mary’s tomb. 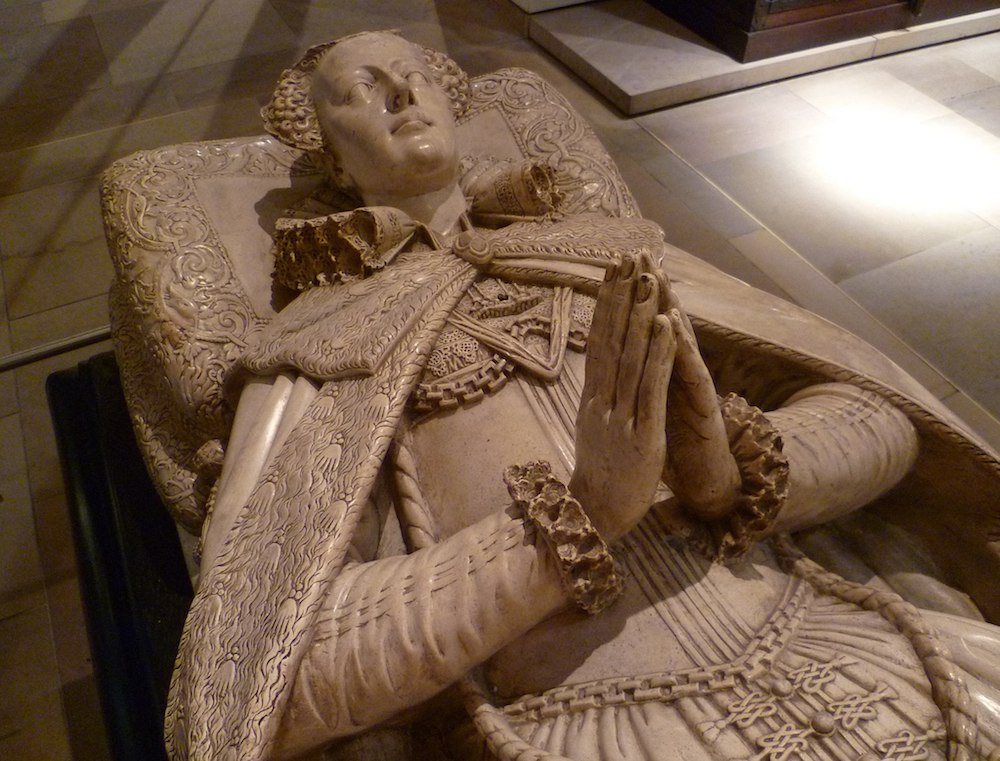 A copy of the effigy of Mary Queen of Scots on her tomb in Westminster Abbey.  Photo Credit: © Kim Traynor via Wikimedia Commons.

Her tomb in Westminster Abbey is striking. Mary’s marble effigy is covered by an architectural canopy, and very lengthy inscriptions in Latin, including an epitaph by Henry Howard, the Earl of Northampton and a favourite of James I, can be found on the tomb. Mary’s much taller and more magnificent tomb is just the across the way from the relatively modest shared tomb of her cousins Elizabeth I and Mary I of England.

Westminster Abbey is the place of burial or commemoration for more than 3,000 people, including royalty, statesmen, poets, churchmen, scientists and musicians. It attracts lovers of history, architecture, fashion and sculpture and is still a working church. Arrange your visit to this treasure house of British culture and history today as part of our London Highlights Tour.