The history of St. Paul’s Cathedral is truly fascinating. This is a building that has gone through multiple iterations over the course of several centuries. It’s been the site of many important historical events, and it is still one of the most iconic buildings in London’s skyline.

St. Paul’s Cathedral is an absolute must-see for anyone visiting the city. Its magnificent dome, harrowing crypt, and mysterious Whispering Gallery are all features you have to experience. And of course, the cathedral’s history is incredibly remarkable in its own right. 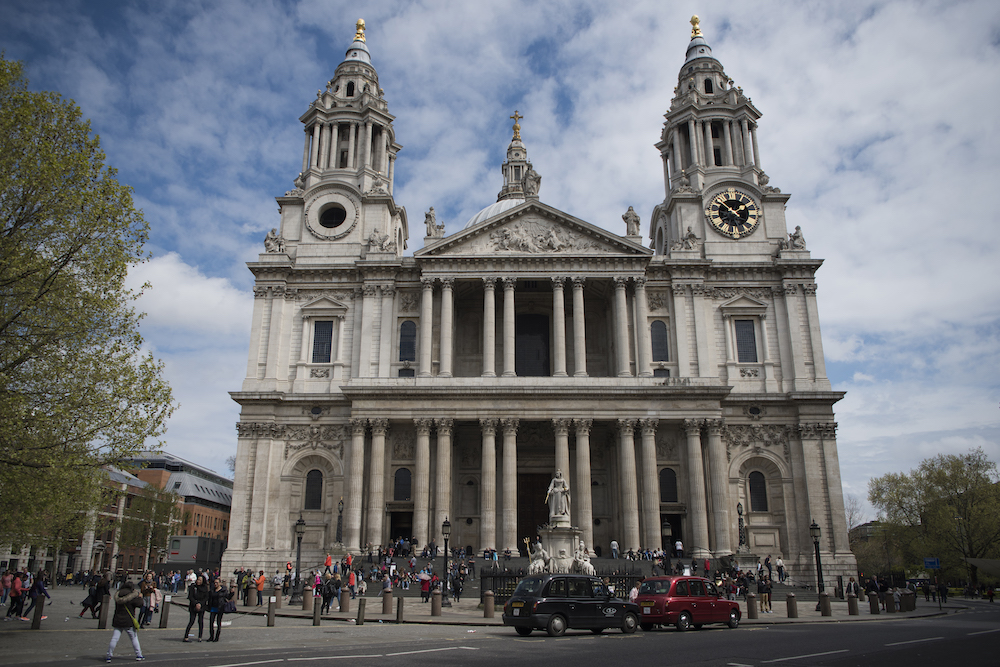 The history of St. Paul’s Cathedral is very colourful as at least four different churches have as been built at this site. The first church dedicated to St. Paul was built by King Erkenwald back in 604 AD. In the beginning, it was only a simple wooden church. Unfortunately, it would eventually be destroyed by fire.

The earliest iterations of St. Paul’s Cathedral never lasted very long. They’d always inevitably be destroyed by fire or Viking attacks. Finally, Bishop Maurice would build a cathedral in 1087 AD that would last almost 600 years. This structure is now affectionately referred to as the Old St. Paul’s Cathedral, and it would be the centre of religious life in London during its lifetime.

Sadly, this cathedral would also succumb to fire during the Great Fire of London in 1666. This fire destroyed four-fifths of London. This included 13,200 houses and 89 churches. One of those churches would be St. Paul’s Cathedral.

Of course, the history of St. Paul’s Cathedral doesn’t end there. Christopher Wren, who was initially contracted to renovate the cathedral, was assigned the task of completely rebuilding it. He had to go through three different designs before getting approved.

The first of these designs were considered too modest. The second design, known as the Great Model, was an ambitious project with a massive dome and Corinthian columns. This was also rejected as it was considered inappropriate for large processions.

The third design would finally get approved after Wren reduced the size of the dome. Funny enough, Wren would go on to make further adjustments after he received approval. The current cathedral now has more in common with his Great Model than the approved design.

Overall, the current version of St. Paul’s Cathedral was built between 1675 and 1711. All things considered, this was a relatively short amount of time.

Since that time, the history of St. Paul’s Cathedral has been inextricably linked to the history of London itself. It’s hosted many important historical events such as the funerals of Winston Churchill and Margaret Thatcher, peace services that marked the end of both world wars, the wedding of Prince Charles and Princess Diana, the 80th and 90th birthdays of Queen Elizabeth II, and much more. 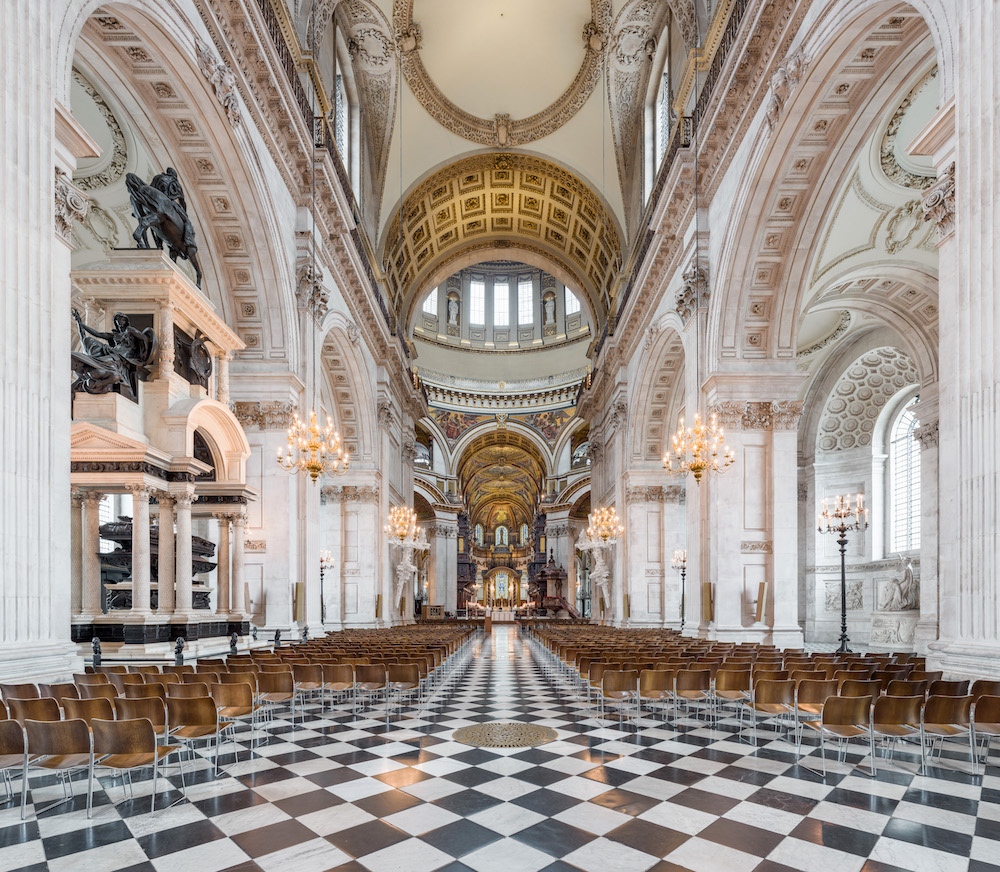 The nave at St Paul’s Cathedral looking towards the choir. Photo Credit: © Diliff via Wikimedia Commons.

Now that we’ve discussed the history of St. Paul’s Cathedral, let’s take a closer look at its architecture. Overall, the cathedral was built in a restrained Baroque style. Easily, its most recognisable feature is its gigantic dome. This was influenced by Michaelangelo’s Dome of St. Peter’s Basilica.

The dome stands at almost 365 feet and weighs over 65,000 tons. As a result, St. Paul’s Cathedral was the tallest building in London until the late 20th century. The dome is one of the largest such structures in the world.

Another one of its most identifying features is its west facade. This part of the church contains a huge portico, a pediment, and a relief that depicts St. Paul’s conversion. There are also two towers on each side of the portico. These were actually added by Wren at the last minute and were not part of the original design.

The interior is incredibly impressive as well. Its long nave is particularly worth seeing. From here, you can see the interior of the Dome, the massive Great West Door, and several scenes from the life of St. Paul.

The crypt also contains several notable figures throughout history. Many of these are artists such as Constable, Turner, and Reynolds. The tombs of the Duke of Wellington, Admiral Nelson, and Christopher Wren himself can also be found here. 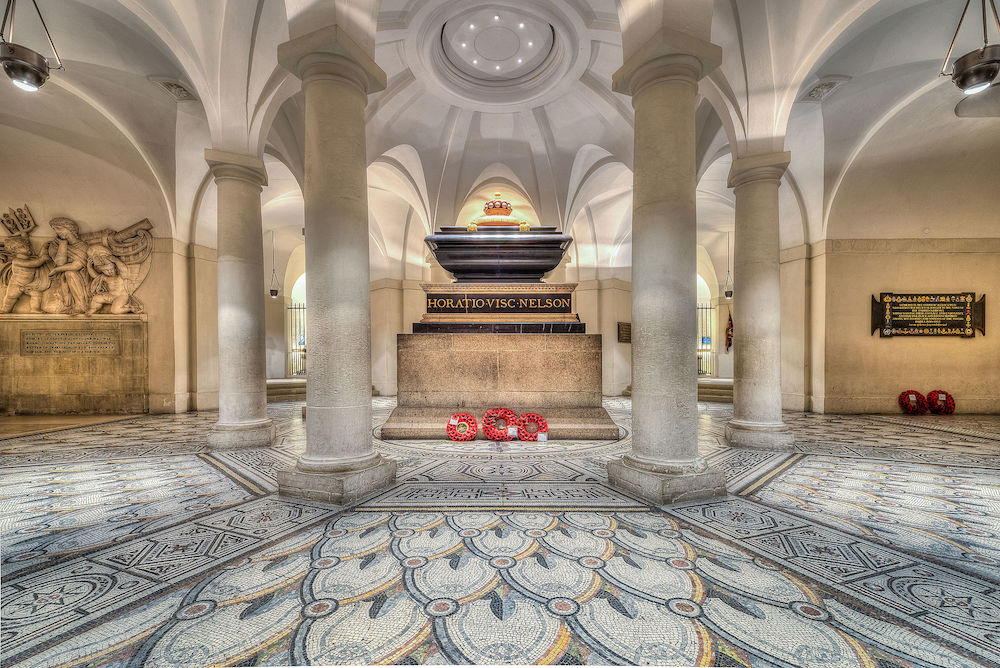 Sarcophagus of Nelson in the crypt at St Paul’s Cathedral in London. Photo Credit: © mhx via Wikimedia Commons.

St Paul’s Cathedral is a Church of England cathedral and the seat of the Bishop of London. Christopher Wren’s architectural masterpiece is located in the City of London, the old walled part of London and now the business district of London. It is within walking distance of a few Underground Stations including St Paul’s (2-minute walk), Mansion House (5-minute walk), Blackfriars (5-minute walk) and Banks (7-minute walk).

To make the most of your time at St Paul’s Cathedral, let us organise a guided tour. You can easily experience as part of our London Highlights Tour. Nearby is the London Museum and the Old Bailey Criminal Court where you can view trials from the viewing gallery. Also, it is close to the Millennium Bridge – a footbridge for crossing the River Thames leading the Tate Modern Art Gallery and Shakespeare’s Globe Theatre. Of course, depending on your interest, we can also add other attractions. 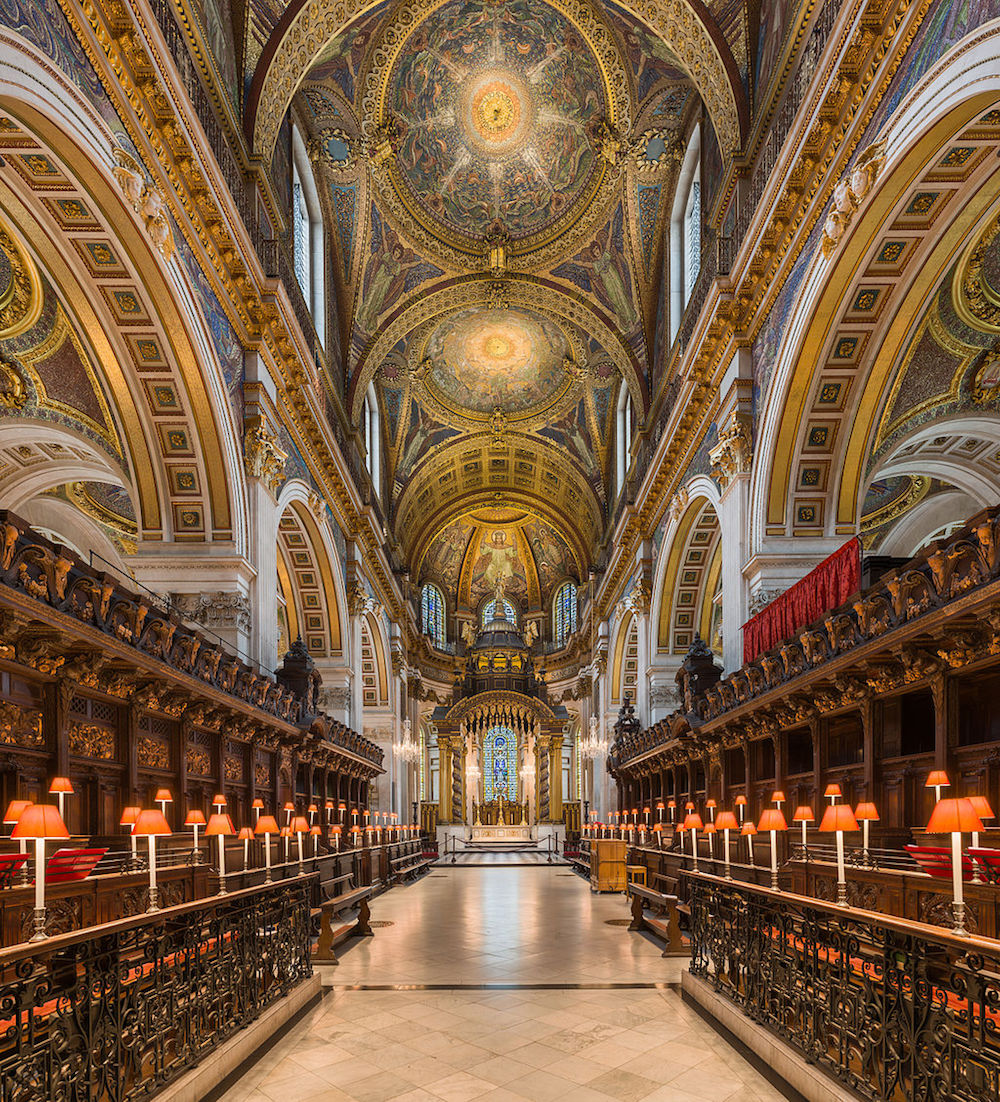