1. A small loan of 2,000 pounds
Arthur Lasenby Liberty, the founder of the Liberty London department store, was a man with a specific vision. He was a draper ever since his early life, but he wanted to do more. Starting off with a vision, he wanted to open a shop that would set new trends in fashion and culture. He took a 2,000-pound loan from his soon-to-be father in law and opened the shop in 1875. He started Liberty & Co with only three staff members, but within 18 months, he was so successful, he was able to pay off the loan in full.

2. A unique design
Even though the Liberty London department store first started off at Regent Street, after several successful decades, it moved to its current location at Great Marlborough Street. The Liberty London department store was always a bit different than its competition, and that’s completely apparent in its design. Its construction used recycled timber from two ships – the HMS Hindustan and HMS Impregnable. There is also a weathervane on top of the shop, and it’s the same one from the HMS Mayflower, the very ship that brought the Pilgrims to America.

3. High-profile fans since always
The Liberty London department store has always had unusual fans. One of the most famous ones, especially in its early life, was Oscar Wilde. The poet had become a massive fan of the shop ever since its early days, and he was one of the most important reasons why the store was becoming more and more popular in America. When Wilde travelled to America, he always wore wardrobe bought at Liberty. He was even quoted for saying it’s the chosen resort for the artistic shopper. 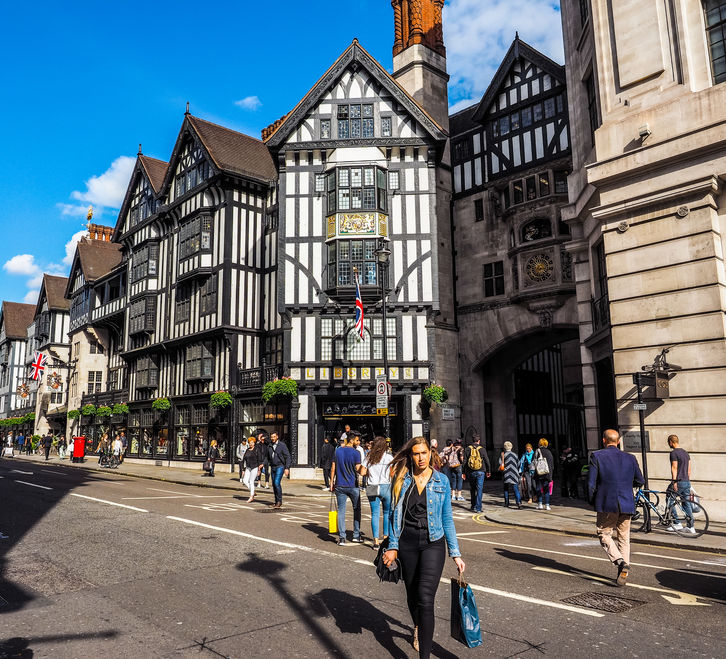 4. Creating New Art
Committed to associating the Liberty London department store with art and fashion, Arthur Liberty built personal relationships with some of England’s most famous designers. With their collaboration, he created Liberty Art Fabrics along with Liberty Colors, who are very closely related with the Art Nouveau movement. Liberty was so closely related to the movement that in Italy, both are synonymous because the movement itself was called Stile Liberty. That wouldn’t have been possible without the involvement of Arthur Liberty himself, so he’s often credited as one of the pillars of the Art Nouveau movement.

5. A Fighting Staff
World War II was one of the most devastating things to ever happen in Europe, and it has effects that can be felt everywhere. Nothing was fully spared, and that goes the same for the Liberty London department store. On the walls by the wooden staircase, you can find a wooden memorial dedicated to the staff members who lost their lives in World War II. The names of the 20 people that left for the war, but never came back, are engraved in the wood as a solemn reminder.

6. Backfiring PR Stunt
One of the pillars on which the Liberty London department store was built upon was delivering high-quality exotic goods. Arthur Liberty himself had always had an interest in the Orient and the countries on the Far East, so he had specialisation of sorts in selling Indian goods. That’s why he brought back a village of 42 Indians that were supposed to live and work in the store. They were put on display, which was deemed humiliating, so the public was not impressed. Failed PR stunt notwithstanding, the rug department where the village was supposed to work is still very famous to this day. 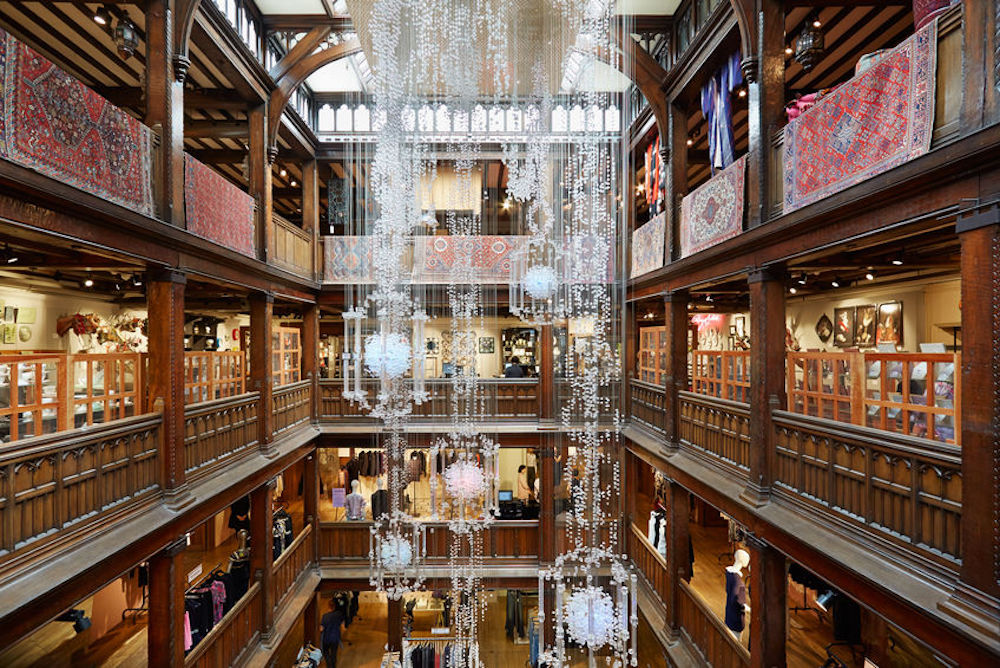 7. A bridge that connects the past to the present
The original location of the Liberty London department store was on Liberty Street and not on Great Marlborough Street. However, a pedestrian bridge connects the two with a short walk, mainly because the past is always critical to both the present and the future. The premises where Liberty’s store was first located are now held by Cos, Gap, and Desigual. The St. George Clock is also found on the bridge, and every quarter, St. George starts chasing the dragon around the clock.

8. Sir Arthur Liberty
The founder and first owner of the Liberty London department store was a visionary who was definitely ahead of his time. He found great success with the store, which is why he was knighted in 1913, four years before his death. During his life, he became really wealthy and lived in an estate in Buckinghamshire. Even though he left no direct heir, control of the Liberty London department store remained in the hands of the family, and they are still shareholders in the company to this very day. His own grave is even an attraction on its own as it was designed by Archibald Knox, who was instrumental in creating designs for the Art Nouveau movement.

9. Its very own Christmas Special
Since the Liberty London department store has always been a big deal, it came as no surprise to many when they announced a TV series. It’s a Christmas special that follows its employees and manager, Ed Burstell, and it’s about the lead-up to the Christmas holidays. It proved to be an entertaining watch, and it was a unique insight into how the store operates. 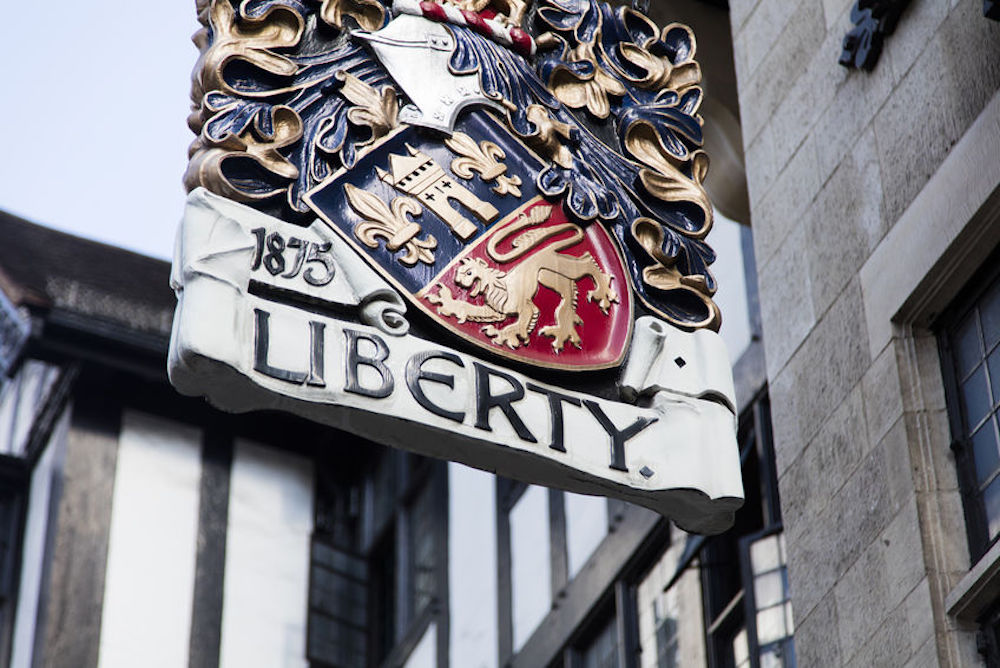 10. Never Still
One of the most important facts about the Liberty London department store is that it’s never stood still and that it has always tried to shake things up. Because of that, several different stores have been opened after the Second World War in Manchester, Bath, York, and many more. However, this all changed in the 1990s because Liberty & Co have focused solely on London and its Japanese subsidiary that sells Liberty products exclusively in Japan.

The Liberty London department store is one of London’s most unique and appreciated shops. It’s been instrumental in influencing art and culture, and it’s a shop that everyone has to experience for themselves because there’s pretty much nothing else like it.