10 Facts About Big Ben In London

Did you even visit London if you didn’t take a picture with the famous Big Ben? If you’re planning to travel to London any time soon, you should definitely visit the clock tower. It doesn’t matter if it’s your first time or not – your trip just won’t be complete if you don’t! However, before you go, read up and get to know the landmark first. Here are 10 facts about Big Ben in London that you should know about: 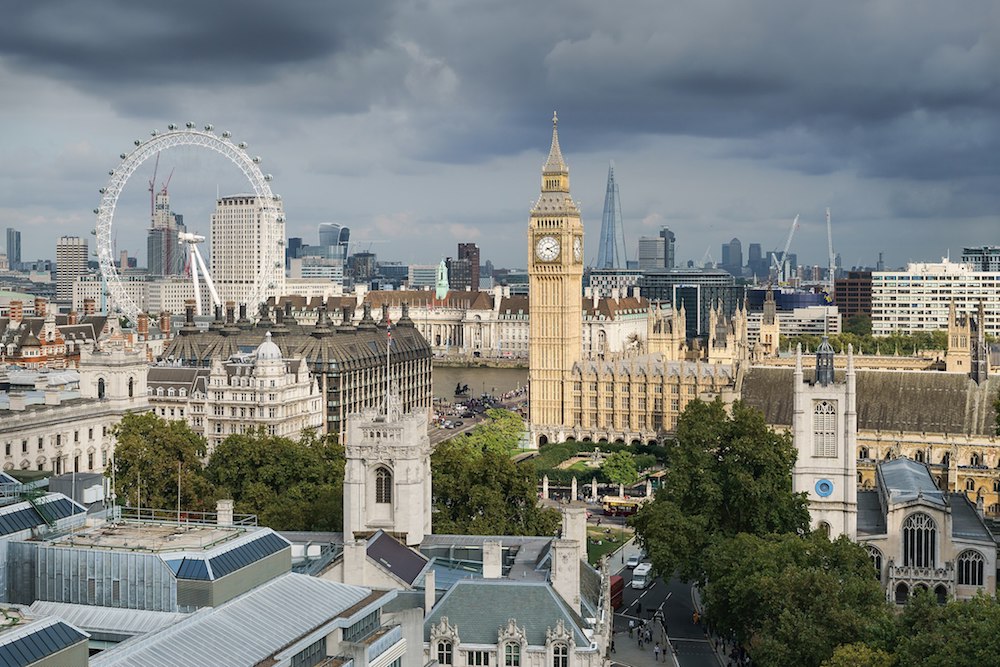 That’s right – this famous London landmark isn’t officially named Big Ben. For hundreds of years, it used to be called, simply, the Clock Tower. But in 2012, the landmark was renamed the Elizabeth Tower to commemorate the Queen’s Diamond Jubilee. So what people actually refer to when they say “Big Ben” is the bell inside the tower. Oddly enough, the bell’s real name isn’t “Big Ben” either; it’s called the Great Bell. So where did “Big Ben” come from? Well, it is a nickname given to the bell and it came from Sir Benjamin Hall’s name. He was the first commissioner of Public Works in London who was in charge of the construction of the Houses of Parliament, the building to which the tower is attached to. His name is inscribed upon the bell when it was casted in 1858, thus the nickname Big Ben.

Here are a few other facts about Big Ben that will tickle your mind: The bell weighs 13.7 tons, which is about twice the weight of a T-Rex! Its diameter is at 8.9 feet, while the hammer inside the bell weighs 441 pounds. Meanwhile, there are four clocks on the tower, one on each side of it. Each clock has a diameter of 23 feet. The hour hand is 9.2 feet long while the minute hand is 14 feet long. The tower required more than 3,000 cubic feet of stone and almost 92,000 cubic feet of bricks to construct. The face of each clock is made of 312 sections of opal glass and requires cleaning every 5 years.

Edward Dent, a clockmaker, created the initial design of the clockwork. But Edmund Beckett Denison changed Dent’s design so much that he became known as the chief designer. As you already know, he wasn’t a clockmaker. He was a lawyer who, interestingly, did not patent his design, so any clockmaker is free to use it.

4. Big Ben has pennies on the pendulum.

On July 11, 1859, Big Ben chimed for the first time. However, just two months later, the bell cracked and the clock tower was silent for four years afterwards while the bell was being repaired. Although that wasn’t the longest time that the clock tower did not chime; in 1976, the bell was repaired for nine long months. 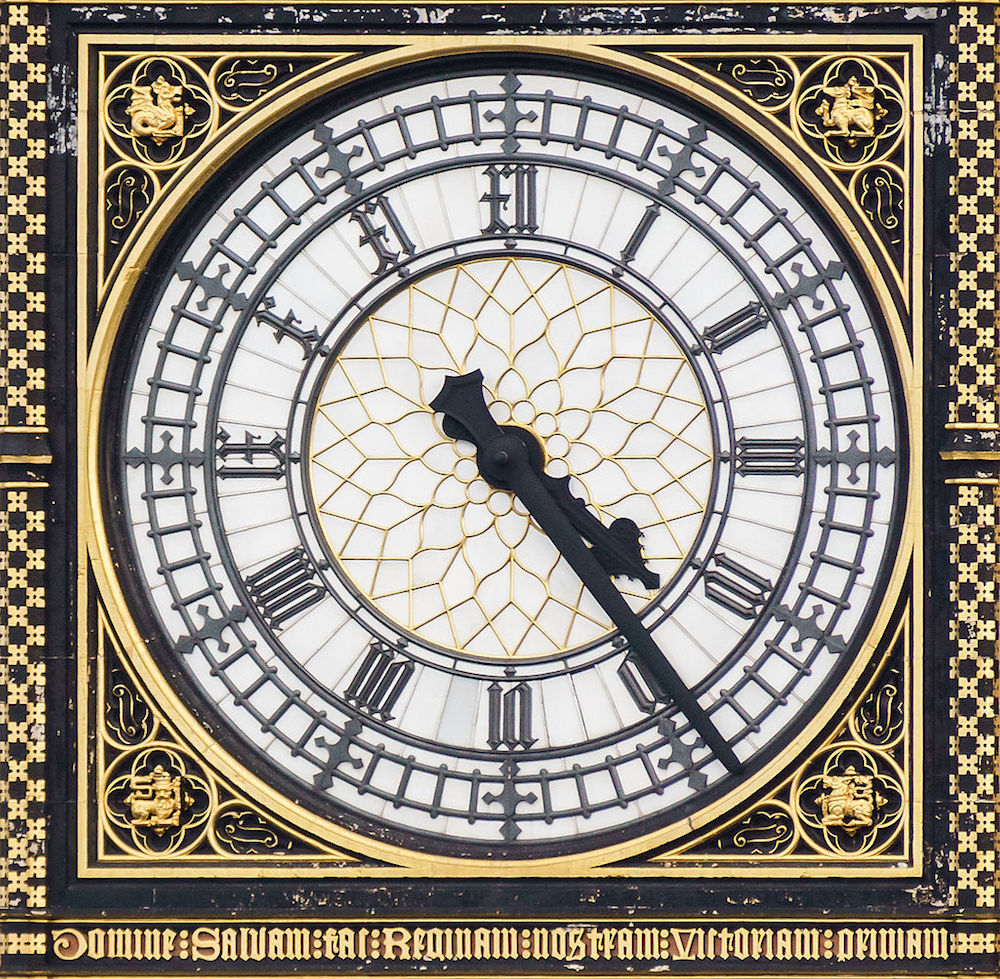 Close up of the dials of Clock Tower aka Big Ben in London. Photo Credit: © Colin via Wikimedia Commons.

One of the most interesting facts about Big Ben is how often it is featured in films. You can see the famous London landmark in seventeen Disney films including Peter Pan, 101 Dalmatians, The Parent Trap, A Christmas Carol, and most recently Mary Poppins Returns. The earliest movie to have recorded the clock tower was Stage Fright in 1950. It also appeared in The Day the Earth Stood Still (1951), 28 Days Later (2003), V for Vendetta (2006), Like Crazy (2011), Spectre (2015), and London Has Fallen (2016). Aside from numerous appearances in films, Big Ben is also very popular among tourists and in fact one of the most popular tourist attraction in the United Kingdom.

7. Big Ben has seen quite a bit of history.

Big Ben has stood tall through the reigns of six monarchs: Queen Victoria, King Edward VII, King George V, King Edward VIII, King George VI, and Queen Elizabeth II. As a tribute to the first monarch that it has lived through, all of the clock’s faces are inscribed with “Oh Lord, keep safe our Queen Victoria the First” in Latin. Aside from monarchs, here are other historical facts about Big Ben:
• The bells toll at the 11th hour of November 11 (Remembrance Day) each year to commemorate the end of the First World War, thanks to the Armistice that took effect in 1918.
• During World War II, the Clock Tower dials remained unlit due to wartime blackout rules in the City of London.
• In 1941, a bomb from a German aircraft hit the top of the tower, resulting in exterior damages.

Big Ben is lit both in the literal sense and the millennial meaning of the word. In the literal sense, the faces of the clocks are lit by 28 85-watt bulbs that are so energy efficient, they can last up to 60,000 hours – that translates to 2,500 days or almost 7 years! How lit is that?! (Get it?) The lights also tell us something about the UK Houses of Parliament. When it is in session, the Ayrton Light on top of the tower is lit up.

9. Big Ben is currently under construction.

The Clock Tower is usually open for tours, but it has been closed since 2016 due to renovations. One of the things they’re working on is the installation of a lift that will make tours a lot more accessible. A toilet will also be installed inside the tower. Tours of Big Ben are expected to resume in 2020.  Of course, you can still catch a glimpse of the exterior via one of our London Tours.

Here are some other cool facts about Big Ben that haven’t been mentioned on the list:
• A flock of birds rested on the minute hand in 1944. They were heavy enough that they caused the clock to run slow.
• Big Ben chimed late on New Year’s Eve in 1962 because of snow and ice that weighed down the hands.
• The Clock Tower leans in an angle of about 0.04 degrees. The inclination is so minute that you won’t notice it unless you pay close attention. 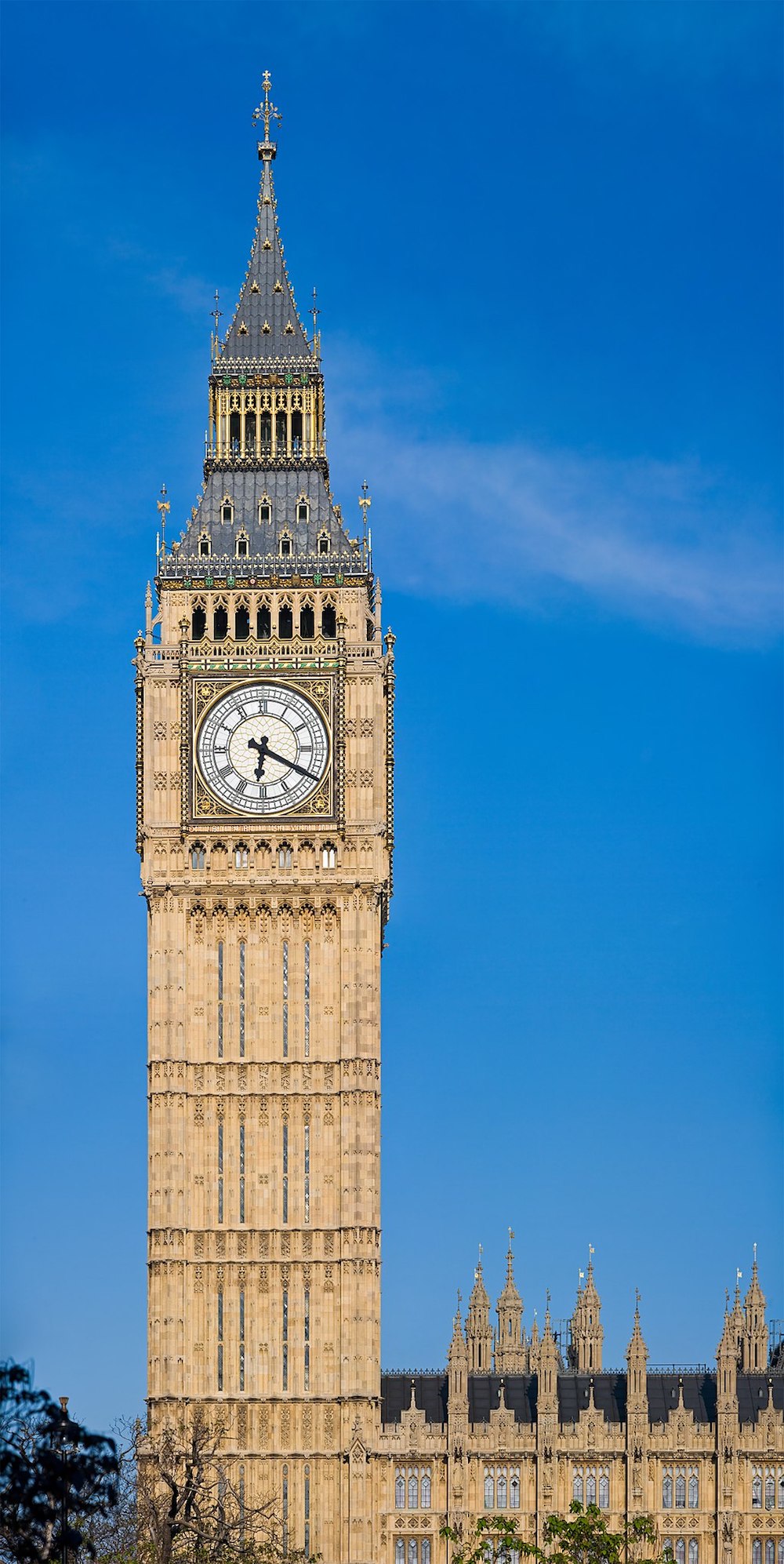